Information theory is a vastly successful theory underpinning much of our communication technology. In many important communication scenarios it allows one to calculate the precise amount of resources needed to perform a cetrain task. For example, the number of bits Alice needs to communicate to send a string $x_1 x_2 \ldots x_n$ of $n$ random trits (elements from $\lbrace 1,2,3\rbrace$) to Bob is given by $(\log_2 3) \cdot n \pm o(n)$. The number of bits Alice needs to communicate to send $n$ random trits to Bob if Bob already knows half of the $x$’s (regarless of whether Alice knows which locations are known to Bob) is $\frac{\log_2 3}{2}\cdot n \pm o(n)$ etc. These quantities can be written as expressions in terms of things like Shannon’s entorpy, mutual information, and conditional mutual information.

The goal of information complexity is to learn to apply information-theoretic formalism to computational settings. As of now (2021), these tend to work beautifully in models of computation that are simple enough to not support information-theoretically secure computation. Understanding why exactly this happens is an interesting direction for future work. Below we give some examples of results based on information complexity from the 2010-2020 period. In some cases the results are new, while in others they give conceptually simpler proofs or more general statements of existing theorems. 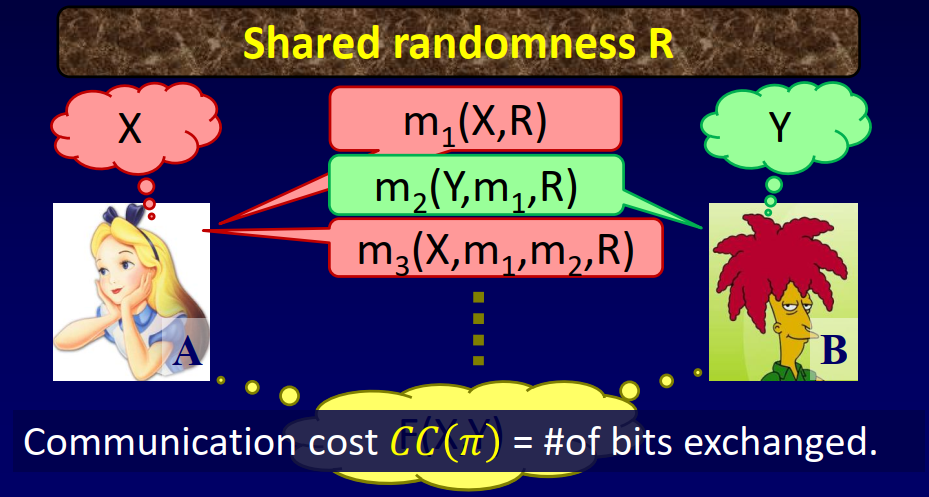 An instructive example is the Equality problem. Alice is given an $n$-bit string $X$, Bob is given an $n$-bit string $Y$, and they would like to determine whether $X=Y$. It can be shown that this can be accomplished with error $<\varepsilon$ using $k \sim \log (1/\varepsilon)$ bits of communication. Alice will compute a random hash $h(X)$ of lenght $k$ on her input $X$ and send the value to Bob. Bob will compare $h(X)$ to $h(Y)$, and will return ‘equal’ if they match. There is a $2^{-k}$ probability of hash collision, which means that ‘equal’ is returned with probability $\approx 2^{-k}$ even when $X\neq Y$. Interestingly, a zero-error protocol for equality requires $n+1$ bits of communication.

Another function with many applications in lower bounds is Disjointness. Alice and Bob are given subsets $X,Y\subset \lbrace 1,\ldots,n\rbrace$ (wich can be represented as length-$n$ bit-strings), and need to determine whether they have an element in common. $Disj_n(X,Y)=1$ if the sets are disjoint, and $0$ if they intersect.

The direct sum problem (in any model of computation) asks whether it costs $k$ times as much to perform $k$ independent copies of a task $T$ as it costs to perform one copy, or whether one gets a “volume discount”. When direct sum holds, one gets a powerful lower bounds tool — a lower bound $L$ on $T$ gets amplified into a lower bound of $k\cdot L$ on the task $T^k$ of performing $k$ copies of $T$. When direct sum fails, new interesting algorithms follow. A famous example of such a failure is matrix-vector multiplication. A counting argument shows that one needs $>n^2$ operations to mutiply an $n\times n$ matrix $A$ by a vector $v$. At the same time, multiplying $A$ by $n$ different vectors $v_1,\ldots,v_n$ is just the problem of multiplying two $n\times n$ matrices, which can be done faster than $n\cdot n^2=n^3$ via fast matrix multiplication.

Information complexity is defined similarly to communication complexity, with information cost replacing communication cost. The (two-party) information cost of a protocol $\Pi$ on inputs $(X,Y)$ is defined to be the amount of information the participants learn about each other’s inputs during the execution of the protocol. Fortunately, the information-theoretic notation makes this quantity easy to formalize: $$ IC(\Pi):= I(X;\Pi|Y) + I(Y;\Pi|X). $$ The first term corresponds to what Bob (who knows $Y$) learns about Alice’s input ($X$) from the protocol $\Pi$. The second term corresponds to what Alice learns. The information complexity of a task $T$ over inputs $(X,Y)$ is defined as the smallest possible information cost of a protocol solving $T$. $$ IC(T):= \inf_{\text{$\Pi$ solves $T$}} IC(\Pi). $$ The infimum here is necessary, since it is possible that there is a sequence of successful protocols $\Pi_1,\Pi_2,\ldots$ that get ever longer while revealing an ever smaller amount of information (in fact, this happens for the simple task of computing the two-bit AND function).

This theorem gives an immediate blueprint for proving direct sum theorems for (randomized) communication complexity. To show (for example) that $CC(T^k) \gtrsim k\cdot CC(T^k)$, one can show that $IC(T)\gtrsim CC(T)$. This inequality, more commonly written as $CC(T)\lesssim IC(T)$ is known as the interactive compression question. It asks whether a protocol $\pi$ that solves $T$ while revealing little information can be “compressed” into a protocol $\pi'$ that uses little communication.

In the context of one-way communication near-perfect compression is generally possibly. For example Huffman coding allows one to encode a message with entropy $H(M)$ using at most $H(M)+1$ bits in expectation. It is generally the case that a protocol with $r$ rounds of communication can be compressed into $O(IC(\Pi)+r)$ bits of communication. Unfortunately, the protocol achieving $IC(T)$ may have an unbounded number of rounds, making such a compression useless in the general interactive setting.

At the same time, Ganor, Kol, and Raz showed a separation between information and communication complexity:

In light of the BR'11 and GKR'15 results, information complexity becomes the “correct” measure for studying amortized cost of two-player randomized communication complexity. The connection from BR'11 between information and amortized communication can be further deepened by a direct product theorem. A direct sum theorem gives a lower bound on the amount of resources required to accomplish $k$ copies of a task. A direct product theorem further says that trying to solve $k$ copies of the task with fewere resources will fail except with an exponentially small probability.

Theorem [BRWY'13,BW'14]: If $I$ bits of information are required to compute a single copy of a function $f(x,y)$ under an input distribution $\mu$, then any communication protocol that attempts to solve $k$ copies of $f$ with input distributed according to $\mu^k$ using $o(k\cdot I)$ bits of communication will fail except with an exponentially small probabiliy $2^{-\Omega(k)}$.

At the heart of the proof of the direct product theorem is applying information-theoretic formalism which treats the “success event” as just another piece of information. Formalism such as the chain rule allows to make statements of the form “succeeding on the first copy does not reveal too much about inputs to the second copy” formal.

The two-bit AND function and Disjointness 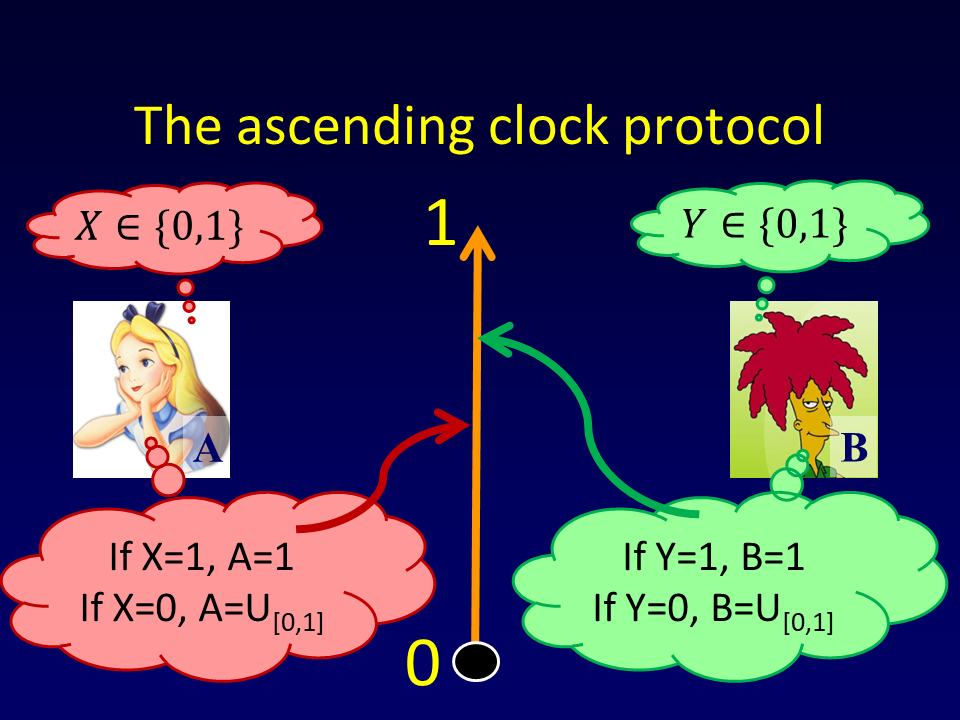 Note that the ascending clock “protocol” is not really a protocol, since it runs in continuous time. It can be approximated by an $r$-round protocol $\pi_r$ with each step representing the clock running for $\frac{1}{r}$ time units. The information cost of such $\pi_r$ is $\sim \frac{1}{r^2}$ bits higher than optimal, which is only attained at the limit. Thus even for the two-bit AND function, optimal information complexity is only attained in the limit!

Based on the optimality of the ascending clock protocol, one can get exact bounds on several two-party communication problems that are based on $n$ copies of the two-bit AND function:

In this case, even the fact that the communication complexity is $O(k)$ and not $O(k \log k)$ is somewhat surprising [HW'07].

Does one need memory to approximately count?

As discussed earlier, the strength of information-theoretic formalism is its ability to formalize vague statements about states of “knowledge” into precise (and correct) mathematical statements. Within complexity theory there are many examples of this from the last two decades. Let us highlight an easy-to-state recent example, motivated by streaming algorithms.

An algorithm is given access to a sequence $x_1,\ldots,x_n$ of uniformly random bits. At the end, it needs to guess whether there were more $0$’s in the sequence or more $1$’s. The algorithm only needs to be correct on $51%$ of the inputs. This means that it is ok to only ouput $1$ on sequences with more than $\frac{n}{2}+\sqrt{n}$ $1$’s, output $0$ on sequences with more than $\frac{n}{2}+\sqrt{n}$ $0$’s, and give a random answer otherwise. The constrained resource is the amount of memory $S$ the algorithm can store while reading the stream.

Note that even though the theorem’s statement appears “obviously true”, it is more delicate than one would expect: (1) it is possible to distinguish sequences with $\frac{n}{2}+n^{0.67}$ $1$’s from uniform sequences using only $O(\log \log n)$ memory; (2) it is possible to solve the problem using $O(\log n)$ memory while only storing $O(1)$ information about the $x_j$’s seen so far. The relevant quantity which must be at least $\Omega(\log n)$ for a typical $t$ turns out to be:

Once this quantity is correctly identified, the proof follows relatively standard proof patterns.

It is very interesting to consider the kinds of problems where information-theoretic reasoning has not been successful so far. It is natural to try the same approach for more than two parties. In a three-party setting one can define the information complexity of problems based on the amount of information the participants need to reveal to each other in order to solve the problem. It is not difficult to prove a direct sum theorem showing that the (3-party) information complexity of $k$ copies of a task $T$ are $k$ times the information complexity of a single copy. Unfortunately, such a statement turns out to be vacuous! Communication amoung 3 or more “honest-but-curious” parties supports information-theoretically secure multi-party computation, which means that any function can be computed by 3 or more parties without revealing anything to each other (except for the answer in the end). Thus the “direct sum” theorem in this case turns out to be of the form “$k\times 0 = 0$”.

Understanding whether this is a surmountable technical barrier, or a true conceptual one (that requires new tools or even new conjectures) is a topic which I hope to work on in the future.